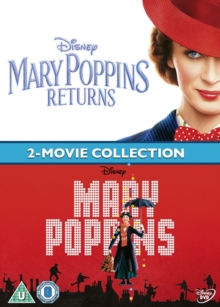 Double bill of Disney musicals. In 'Mary Poppins' (1964), set in Edwardian London, the Banks family is looking for a new nanny, but the children's advert for their ideal candidate is torn up and thrown into the fire by their strict father.

Miraculously, the paper reassembles, floats up the chimney and along comes the magical Mary Poppins (Julie Andrews), flying down from the sky on her umbrella.

She brings fun and a guiding hand to the children's lives and, along with her friend Bert (Dick Van Dyke), whisks them off on a series of wonderful adventures.

At his lowest moment, Mary Poppins (Emily Blunt) returns to lend a helping hand and once again bring a little magic and adventure into the lives of the Banks family.