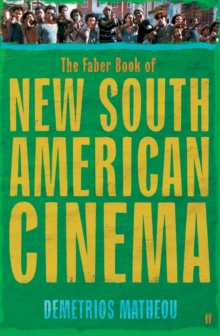 Walter Salles's film The Motorcycle Diaries follows the journey made by the young medical student Che Guevara across Argentina, through Chile, to Peru.

At the climax, Guevara exhorts his audience to see beyond their borders and embrace a truly continental identity.

This vision lives on today, in the work of a new generation of South American filmmakers.

Following the buena onda, the 'good wave' that included the Brazilian favela film City of God, the 2000s saw a renaissance in the continent's cinema, with such diverse Argentine movies as Nine Queens and The Holy Girl, and dazzling new work from Uruguay, Chile and Peru.

The new directors have won prizes at major film festivals, been nominated for Oscars, and captured the imagination of audiences worldwide.

Many tackle the question of identity amid the ever-changing political and social landscapes of their troubled countries, while developing a network of collaboration and inspiration across the continent.

This book featured interviews with the most significant voices of this Latin new wave - people who are 'bonded by blood, politics, strife, courage, ingenuity, and a shared desire and splendid resolve to make movies'.