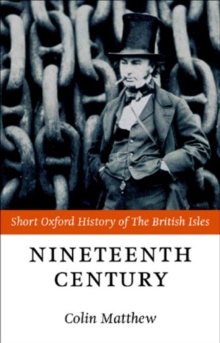 Part of the Short Oxford History of the British Isles series

The complete Short Oxford History of The British Isles (series editor: Professor Paul Langford) will cover the history of the British Isles from the Roman Era to the present in eleven volumes. In each, experts write to their strengths tackling the key issues including society, economy, religion, politics, and culture head-on in chapters that will be at once wide-ranging surveys and searching analyses. Each book is specifically designed with the non-specialist reader in mind; but the authority of the contributors and the vigour of the interpretations will make them necessary and challenging reading for fellow academics across a range of disciplines.

The nineteenth century was Britain's moment as a world power, not only in the narrow political sense, but with respect to a vast range of activities and achievements.

This book sets out to describe the force and complexity of that experience, and to cover, in an interdisciplinary way, the political, economic, and cultural history of the British Isles between 1815 and 1901.It looks at the Victorian economy, that transforming great engine of change, as well as Victorian public life as a cultural and political narrative by including chapters on women and domesticity, the remarkable interplay of religion, intellect and science, art, architecture and the city, as well as literature, and the theatre and music of the time. This collection of works by eminent historians brilliantly depicts the nations of the British Isles at the height of Britain's world power.