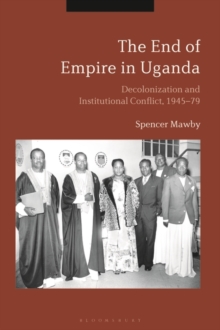 The End of Empire in Uganda : Decolonization and Institutional Conflict, 1945-79

The negative legacy of the British empire is often thought of in terms of war and economic exploitation, while the positive contribution is associated with the establishment of good governance and effective, modern institutions.

In this new analysis of the end of empire in Uganda, Spencer Mawby challenges these preconceptions by explaining the many difficulties which arose when the British attempted to impose western institutional models on Ugandan society. Ranging from international institutions, including the Commonwealth, to state organisations, like the parliament and army, and to civic institutions such as trade unions, the press and the Anglican church, Mawby uncovers a wealth of new material about the way in which the British sought to consolidate their influence in the years prior to independence.

The book also investigates how Ugandans responded to institutional reform and innovation both before and after independence, and in doing so sheds new light on the emergence of the notorious military dictatorship of Idi Amin.

By unpicking historical orthodoxies about 20th-century imperial history, this institutional history of the end of empire and the early years of independence offers an opportunity to think afresh about the nature of the colonial impact on Africa and the development of authoritarian rule on the continent.