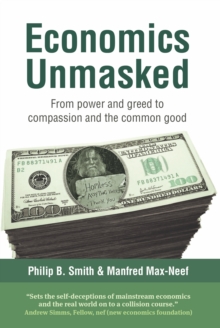 Economics unmasked : from power and greed to compassion and the common good

By: Max-Neef, Manfred,  Smith, Philip B.

The economic system under which we live not only forces the great majority of humankind to live their lives in indignity and poverty but also threatens all forms of life on Earth.

Economics Unmasked presents a cogent critique of the dominant economic system, showing that the theoretical constructions of mainstream economics work mainly to bring about injustice. The merciless onslaught on the global ecosystem of recent decades, brought about by the massive increase in the production of goods and the consequent depletion of nature's reserves, is not a chance property of the economic system.

It is a direct result of neoliberal economic thinking, which recognizes value only in material things.

The growth obsession is not a mistaken conception that mainstream economists can unlearn, it is inherent in their view of life.

But a socio-economic system based on the growth obsession can never be sustainable. This book outlines the foundations of a new economics - where justice, human dignity, compassion and reverence for life are the guiding values.

Contrary to the absurd assumption of mainstream economists that economics is a value-free science, a new economics must make its values explicit.