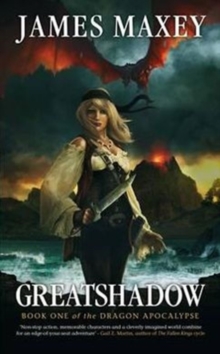 Part of the The Dragon Apocalypse series

The warrior known as Infidel is legendary for her superhuman strength and skin tough as mail; she's made few friends during her career as a sword-for-hire, and many powerful enemies.

Following the death of her closest companion, Infidel wearies of life as a mercenary.

She sets her eyes on one final prize that will allow her to live out the rest of her days in luxury: the treasure trove of Greatshadow, the primal dragon of fire.

His malign intelligence spies upon mankind through every flickering candle, patiently waiting to devour those careless with even the smallest flame.

The Church of the Book has gathered a team of twelve adventurers to slay the dragon once and for all. Tensions run high between the leaders of the quest, who view the mission as a holy duty, and the super-powered mercenaries who add power to their ranks, dreaming only of Greatshadow's vast wealth.

If they fail to slay the beast, will they doom mankind to death by fire?