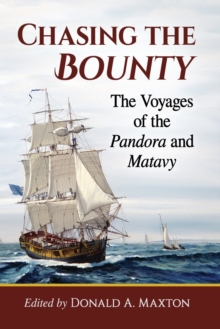 Chasing the Bounty : The Voyages of the Pandora and Matavy

By: Maxton, Donald A.(Edited by)

Popular films about the Bounty mutiny only scratch the surface of its multilayered history.

This rebellion on a British vessel in 1789 spawned a sequence of engrossing, sometimes tragic, events during the voyages of H.M.S.

Pandora-dispatched to track down the mutineers and return them to England for court-martial-and Matavy, a schooner built by the mutineers in Tahiti. This is the first book to include eyewitness accounts from five men who endured these voyages.

It features the first book publication of a narrative by a member of Matavy's crew, who vividly describes a desperate struggle to survive with meager provisions among islands filled with hostile natives.

A long, previously unpublished poem by an anonymous sailor on Pandora recounts the ship's sinking, the survivors' tortuous journey to the Dutch East Indies, and their return to England.

The captain's official reports have been corrected from an older, inaccurate version, and his complete, unedited statement on the loss of Pandora appears for the first time in book form.

The appendices summarize the Bounty and Pandora court-martials and the later history of each narrator.