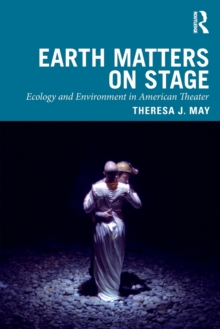 Earth Matters on Stage : Ecology and Environment in American Theatre

Earth Matters tells the story of how American theatre has shaped popular understandings of the environment throughout the 20th century as it argues for theatre's potential power in the age of climate change.

Using cultural and environmental history, seven chapters illuminate key moments in American theatre and American environmentalism over the course of the 20th century in the US.

Earth Matters focuses in particular on how drama has represented environmental injustice, and how inequality has become part of the American environmental landscape.

As the first book-length ecocritical study of American theatre, Earth Matters examines both familiar dramas, but also lesser-known grassroots plays, in an effort to show that theatre can be a powerful force for social change From frontier drama of the late nineteenth century to the eco-theatre movement, Earth Matters argues that theatre has been part of the history of environmental ideas and action in the U.S.

Earth Matters also maps the rise of an ecocritical thought and ecotheatre practice-what the author calls ecodramaturgy -showing how theatre has informed environmental perceptions and policies.

Through key plays and productions, it identifies strategies for artists who want their work to contribute to cultural transformation in the face of climate change.