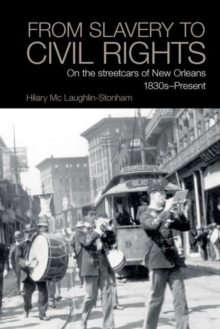 From Slavery to Civil Rights : On the streetcars of New Orleans 1830s-Present

Part of the Liverpool Studies in International Slavery series

An Open Access edition of this book will be made available on publication on our website and on the OAPEN Library, funded by the LUP Open Access Author Fund. The history of Louisiana from slavery until the Civil Rights Act of 1964 shows that unique influences within the state were responsible for a distinctive political and social culture.

In New Orleans, the most populous city in the state, this was reflected in the conflict that arose on segregated streetcars that ran throughout the crescent city. This study chronologically surveys segregation on the streetcars from the antebellum period in which black stereotypes and justification for segregation were formed.

It considers the shifting nature of white supremacy that took hold in New Orleans after the Civil War and how this came to be played out daily, in public, on the streetcars.

The paternalistic nature of white supremacy is considered and how this was gradually replaced with an unassailable whitesupremacist atmosphere that often restricted the actions of whites, as well as blacks, and the effect that this had on urban transport. Streetcars became the 'theatres' for black resistance throughout the era and this survey considers the symbolic part they played in civil rights up to the present day.