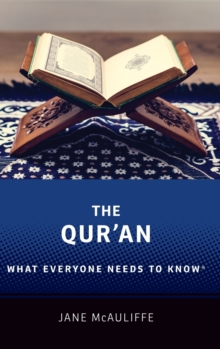 Millions of non-Muslims know the name of the Muslim scripture, whether it is written as "Qur'an" or "Quran" or "Koran." But for most, that is all they know.

Many have fallen victim to the mass of misinformation that circulates about the Qur'an.

Others may have tried to read the Qur'an, but the text itself is tough to decipher.

With no sense of context, chronology, or interpretive history, many would-be readers of the Qur'an quickly give up the effort.

As for thosetrying to find out what the Qur'an says about any particular subject or issue, they, too, soon discover that this is not a simple or straightforward undertaking. A clear, concise introduction to the holy book that guides the lives of 1.6 billion people on our planet, this brief volume opens the world of the Qur'an to interested readers who want to know where this scripture came from and how it has achieved a profound influence in today's world. Writing in an easy-to-read question-and-answer format, Jane McAuliffe, one of the world's foremost scholars of the Qur'an, introduces readers to this important text by discussing its origins, structure, themes,interpretations, and what it has to say about a host of critical contemporary issues.

Where did the Qur'an come from? Do Muslims believe that the Qur'an is God's own word?

How do Muslims study the Qur'an? What does the Qur'an say about God? About family? About ethics? About violence? By answeringthe questions that many people have about the Qur'an and its role in Muslim faith, this book offers an invaluable resource for anyone who is curious about one of the world's most important faiths.