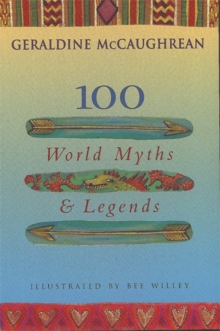 By: McCaughrean, Geraldine,  Willey, Bee(Illustrated by)

The hundred stories in this book come from all four corners of the world -- from Bolivia, New Zealand, the Middle East, many parts of Africa, Egypt, India, China, Japan, Germany, Finland, Siberia, Greece, Canada, Mexico, France, England and many other countries. They deal with the creation of the world, with gods and goddesses, animals and mythical beasts, heroes and heroines and ordinary people in extraordinary situations. Some of them are well-known - Robin Hood, The Pied Piper, El Cid, Pygmalion - but far more of them are joyful new discoveries. They are chosen because Geraldine McCaughrean loves them and with her genius for spinning tales has made them into a glorious, colourful book of wonders. First published in four illustrated volumes, this is a new edition for a new readership.