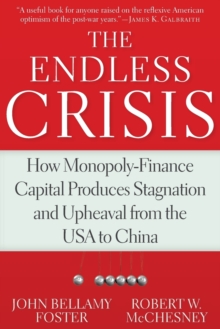 The Endless Crisis : How Monopoly-Finance Capital Produces Stagnation and Upheaval from the USA to China

The days of boom and bubble are over, and the time has come to understand the long-term economic reality.

Although the Great Recession officially ended in 2009, hopes for a new phase of economic expansion were quickly dashed.

Instead, growth has been slow, unemployment has remained high, wages and benefits have seen little improvement, poverty has increased, and the trend toward more inequality of incomes and wealth has continued.

It appears that the Great Recession has given way to a period of long-term anaemic growth, which Foster and McChesney aptly term the Great Stagnation.This incisive and timely book traces the origins of economic stagnation and explains what it means for a clear understanding of our current situation.

The authors point out that increasing monopolization of the economy-when a handful of large firms dominate one or several industries-leads to an over-abundance of capital and too few profitable investment opportunities, with economic stagnation as the result. Absent powerful stimuli to investment, such as historic innovations like the automobile or major government spending, modern capitalist economies have become increasingly dependent on the financial sector to realize profits. And while financialisation may have provided a respite from stagnation, it is a solution that cannot last indefinitely, as instability in financial markets over the last half-decade has made clear.