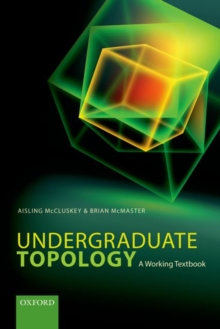 This textbook offers an accessible, modern introduction at undergraduate level to an area known variously as general topology, point-set topology or analytic topology with a particular focus on helping students to build theory for themselves.

It is the result of several years of the authors' combined university teaching experience stimulated by sustained interest in advanced mathematical thinking and learning, alongside established research careers in analytictopology.

Point-set topology is a discipline that needs relatively little background knowledge, but sufficient determination to grasp ideas precisely and to argue with straight and careful logic.

Research and long experience in undergraduate mathematics education suggests that an optimal way to learn such a subject is to teach it to yourself, pro-actively, by guided reading of brief skeleton notes and by doing your own spadework to fill in the details and to flesh out the examples.

This text willfacilitate such an approach for those learners who opt to do it this way and for those instructors who would like to encourage this so-called 'Moore approach', even for a modest segment of the teaching term or for part of the class.

In reality, most students simply do not have the combination of time, background and motivation needed to implement such a plan fully.

The accessibility, flexibility and completeness of this text enable it to be used equally effectively for more conventional instructor-led courses.

Critically, it furnishes a rich variety of exercises and examples, many of which have specimen solutions, through which to gain in confidence and competence.