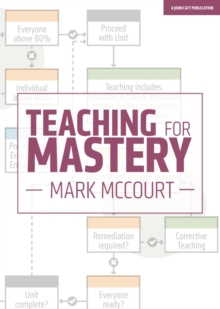 There are many models of schooling; some work, some don't.

Mastery is an entire model of schooling with over 100 years of provenance, its impact has been researched for decades, with many of the world's greatest education minds testing and refining the approach.

It's one of the models of schooling that actually works.

In this book, Mark McCourt examines the history of a teaching for mastery approach, from its early beginnings to the modern day when cognitive scientists have been able to bring further evidence to the debate, demonstrating why a model that was first proposed in the 1910s has the incredible impact on both pupil attainment and attitudes to learning that it has had all around the world over many decades.

Drawing on examples from cross disciplines, the story of mastery is one that all educators can engage with.

Mark also draws on his own subject, mathematics, to further exemplify the approach and to give practical examples of pedagogies and didactics that teachers can deploy immediately in their own classroom.