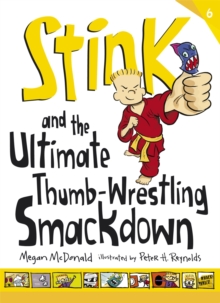 Stink and the ultimate thumb-wrestling smackdown

Stink and the ultimate thumb-wrestling smackdown

Part of the Stink series

Stink needs a sport in the sixth book in the series.

Can his alter-ego, Shark Hammersmash, wrestle a win at thumb wars? Or will a perfect karate kick lead him to vistory?From bestselling author/illustrator duo Megan McDonald and Peter H.

Reynolds comes in the sixth book in the hilarious series about Stink, Judy Moody's little brother.

Perfect for fans of Horrid Henry, Kes Gray and Jeremy Strong. For the first time in his life, Stink Moody has brought home a less-than-perfect school report.

Yikes! Time for him to get into fighting shape and beat back that U for Unsatisfactory in PE!

A scan of the sports channel leads to a knock-out find: world-class thumb-wrestling, with tricky moves like Snake in the Grass and Santa's Little Helper (no equipment needed, save for a tiny terrifying mask to sit on your thumb).

But when Mum and Dad are not wowed, Stink gets another idea: he'll kick and punch his way to a yellow belt in karate.

A great way to encourage children to exercise, this book proves that there is a sport for everyone!