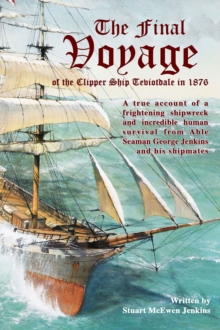 The Final Voyage of the Clipper Ship Teviotdale in 1876

I first became aware of the hand-written manuscript recording my grandfather's memories of his epic voyage in the clipper ship Teviotdale in 1876 when I was a child during the years prior to World War 2.

However, it was not until 2004 that I took a real interest in what has proved to be a remarkable true story. This was sparked off by an invitation from a crew member taking part in one of the first Round the World yacht races, which was due to start from Portsmouth later in the year.

A crew member had noticed my company's web site advertising military combat identification and search and rescue beacons and, as a result, our UK sales agent and I were invited to visit Southampton Harbour to actually go on board one of these yachts to discuss their requirements. One requirement was for a flashing rescue beacon which could be attached to a life jacket in case of `man overboard' and the other was for a simple glow wand device for the crew to use when manning the yacht during pitch darkness without dazzling the helmsman during heavy seas.

It was during this conversation that I began to think of what it would have been like for the crew of the Teviotdale, sailing under these self-same dangerous conditions in the southern Indian Ocean, also in pitch darkness.

As a result, I became very friendly with the crew members of this particular yacht and I was very happy to supply a number of our devices for the crew to test for us during their voyage round the world. On the day they set sail from Gun Wharf Quay in Portsmouth I went to wish the crew of this yacht `bon voyage' and I gave them a copy of my grandfather's hand-written narrative to take on board to sail around the world with them, in memory of my grandfather. A Victorian Sea Adventure is the culmination of my research into the events surrounding the loss of the Teviotdale, and incorporates the full text of my grandfather's lecture on the clipper ship's fateful voyage.

I hope it will be of interest to all those with an interest in the sea and conditions on board such ships from a bygone era.