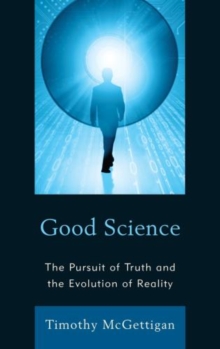 Good Science : The Pursuit of Truth and the Evolution of Reality

Drawing upon a sequence of the most important breakthroughs in the history of science, Timothy McGettigan's Good Science develops a ground-breaking argument about the evolution of social reality.

From Galileo to Einstein and beyond, landmark achievements in science have redefined conceptions of the universe.

Indeed, science has also modified the real world by transforming fantasies, such as space travel and thinking computers, into commonplace features of everyday reality.

Though science has routinely produced marvels of thought and technology, scientific achievements have also brought about dire threats to human existence, such as overpopulation, ecological disaster, and nuclear annihilation.

As such, science must be understood as the most important, and simultaneously, the most hazardous invention that humans have ever conceived.

Nevertheless, Good Science asserts that the fortunes of humanity have always been closely tied to the pursuit of more and better knowledge.

Thus, imperfect as it may be, science represents the best available means of confronting global crises and creating abundant opportunities for humanity to thrive in the future.

Those interested in science, sociology, and what the future holds for both will appreciate this critical and informative work. View a YouTube video created by the author here.