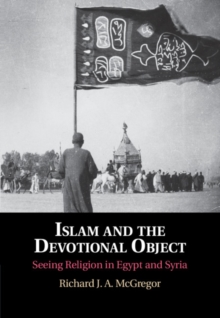 Islam and the Devotional Object : Seeing Religion in Egypt and Syria

In this book, Richard J. A. McGregor offers a history of Islamic practice through the aesthetic reception of medieval religious objects.

Among these were the precious dress sewn yearly for the Ka'ba, and large colorful sedans mounted on camels, which mysteriously completed the Hajj without carrying a single passenger.

Along with the brisk trade in Islamic relics, these objects and the variety of contested meanings attached to them, constituted material practices of religion that persisted into the colonial era, but were suppressed in the twentieth century.

McGregor here recovers the biographies of religious objects, including relics, banners, public texts, and coverings for the Ka'ba.

Reconstructing the premodern visual culture of Islamic Egypt and Syria, he follows the shifting meanings attached to objects of devotion, as well as the contingent nature of religious practice and experience.