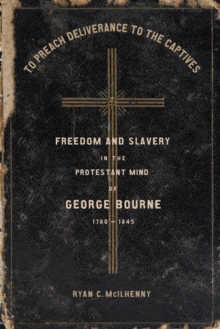 To Preach Deliverance to the Captives : Freedom and Slavery in the Protestant Mind of George Bourne, 1780-1845

Part of the Antislavery, abolition, and the Atlantic world series

George Bourne was one of the early American republic's first immediate abolitionists, an influential figure who paved the way for the campaign against slavery in the antebellum period.

His approach to reform was shaped by a conservative Protestant outlook that became increasingly hostile to Catholicism.

In To Preach Deliverance to the Captives, Ryan C. McIlhenny examines the interplay of Bourne's pioneering efforts in abolitionism and his intensely anti-Catholic views. McIlhenny portrays Bourne as both a radical and a conservative, a reformer who desired to get back to the roots of Christianity for the purpose of completely dismantling slavery.

Bourne's commentary on a variety of controversial topics, slavery, race, and citizenship; the role of women; Christianity and republicanism; the importance of the Bible; and the place of the church in civil society, put him at the center of many debates.

He remains a complex figure: a polymath situated within the political, social, and cultural possibilities of an early republic that he was eager to play a part in shaping. Bourne's religious radicalism gave rise to his hope for an emerging post-revolutionary republic that would focus mainly on its religious foundations.

The strength of the American nation, in Bourne's mind, rested not only on institutions indicative of a republican form of government but also on a pure Christianity, exemplified best in historical Protestantism.

To Bourne, the future of the fledgling nation depended not only on principles and institutions but also on the activism of Protestant leaders like himself.