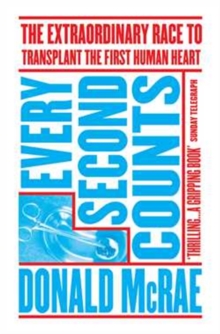 Every second counts : the extraordinary race to transplant the first human heart

It culminated in a terrifying moment in the early hours of 3 December 1967 when, in a cramped operating theatre in a Cape Town hospital, Professor Chris Barnard stared into an empty cavity from which he had just removed a heart.

He knew that he had only minutes left to make history and save the life of a 55-year-old man by filling the gaping hole in his chest with a heart which had just been beating inside a 25-year-old woman.

Every Second Countsis the story of this gripping race to conquer the greatest of medical challenges.

It also reveals the truth about the man at the centre of it all, whose turbulent life story was just as gripping.

The kind of true story that would be dismissed as far-fetched if presented as fiction, it combines an utterly compelling portrait of cutting-edge science with raw human drama, and shows how the course of medicine itself was changed for ever.