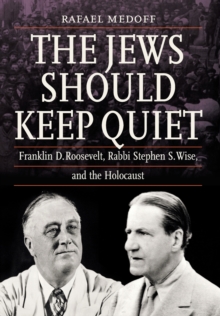 Based on recently discovered documents, The Jews Should Keep Quiet reassesses the hows and whys behind the Franklin D.

Virgin Islands, dismissed proposals to use empty Liberty ships returning from Europe to carry refugees, and rejected pleas to drop bombs on the railways leading to Auschwitz, even while American planes were bombing targets only a few miles away-actions that would not have conflicted with the larger goal of winning the war. What motivated FDR? Medoff explores the sensitive question of the president's private sentiments toward Jews.

Wise, American Jewry's foremost leader in the 1930s and 1940s, swayed the U.S. response to the Holocaust. Documenting how Roosevelt and others pressured Wise to stifle American Jewish criticism of FDR's policies, Medoff chronicles how and why the American Jewish community largely fell in line with Wise.

Ultimately Medoff weighs the administration's realistic options for rescue action, which, if taken, would have saved many lives.