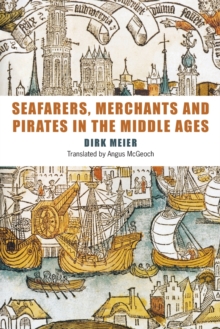 Seafarers, merchants and pirates in the Middle Ages

By: Meier, Dirk,  McGeoch, Angus(Translated by)

The first sailors braved the North Sea and the Baltic in open wooden boats: their aims were varied - to fish, to trade, to conquer and plunder.

Without maps or compasses, they steered by the sun or by landmarks on the coast.

Nevertheless they discovered Iceland and North America and explored the rivers that flowed through Europe and Russia into the Black Sea. With the Frisians and the Vikings, extensive trade routes, better ships, larger harboursand wealthy coastal towns developed.

The pinnacle of these advances was the Hansa, an association of port cities running from Bruges to Riga. In recent years archaeologists have discovered much about the development of their ships: the elegant Viking longboat, the ubiquitous cog, the carrack and the caravel.

Much, too, has been revealed about life in Viking settlements and the bustling Hanseatic cities.

In the first paperback edition of this engaging and highly-illustrated study, Dirk Meier brings to life the world of the medieval seaman, based on evidence from ship excavations and contemporary accounts of voyages. Dr Dirk Meier teaches ancient and medieval history and is Head of Coastal Archaeology at the Christian Albrechts University in Kiel, Germany.