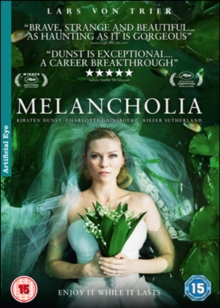 Played out in two acts, the film opens with the wedding of Justine (Dunst) and Michael (Alexander Skarsgård): a sumptuous affair paid for by Justine's Claire (Charlotte Gainsbourg) and her husband John (Kiefer Sutherland).

However, when Justine notices a strange star in the sky, she starts behaving oddly and the wedding is ruined.

The film's second act follows Justine, now extremely weak and ill, after she goes to live with her sister.

As Claire and John struggle to deal with Justine's condition, astronomy buff Claire becomes increasingly concerned about a large blue planet that is threatening to collide with the earth.