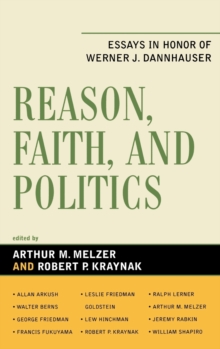 Behind many of the hottest political issues of the current moment -abortion, stem-cell research, Intelligent Design, Islamic fundamentalism-stands a resurgence of the centuries-old contest between religion and the Enlightenment. In such circumstances, a volume of essays honoring the thought of Werner J.

Dannhauser is particularly timely. An expert on Nietzsche and Jewish political thought, Dannhauser's abiding concern was the issue of "reason, faith, and politics." Does secular rationalism, as promoted by the Enlightenment, provide an adequate basis for moral and political life? Or does the modern state ultimately require religious habits and beliefs even while tending to undermine them?

Is the emergence of the religious right, then, a necessary and salutary phenomenon? Or does it pose dangers to our liberal constitution and to minority religious communities, such as Jews and Muslims?

In short, is Enlightenment rationalism helpful or harmful to social life? And is Biblical religion necessary for or in tension with American liberal democracy?

Questions such as these, which have concerned Dannhauser throughout a long scholarly career, have recently reemerged as front-page issues. In addressing this theme, the eleven essays comprising the present volume-by such scholars as Francis Fukuyama, Walter Berns, Jeremy Rabkin, and Ralph Lerner-range widely over Western intellectual history, from classical philosophy and ancient Israel, to the Medieval period and the Renaissance, to Nietzsche, and to contemporary neoconservative thought.