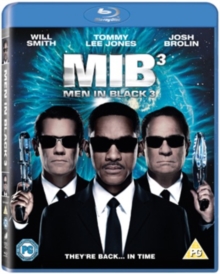 Will Smith and Tommy Lee Jones reprise their roles as Agents J and K in this third instalment of the sci-fi action comedy.

Agent J (Smith) has long been every bit as perplexed by the perpetually-surly countenance of his older partner, Agent K (Jones), as he has been by the variety of aliens the pair are charged with keeping under control.

However, when alien forces assassinate K with such extraterrestrial efficiency Agent J seems to be the only person to believe that K hasn't been dead for 40 years, the younger man is at a loss and determines to get his partner back.

With the aid of a terrifying 'time jump', Agent J travels back to MIB's early years in the 1960s.

Here he hooks up with a younger Agent K (Josh Brolin) and attempts to prevent his death and change the course of history.

Will he also learn a thing or two about the secrets of the universe the older K kept so close to his chest?