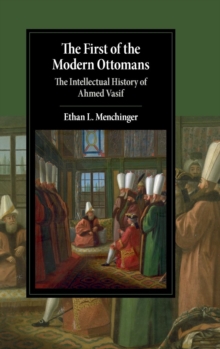 The first of the modern Ottomans : the intellectual history of Ahmed Vasif

Part of the Cambridge Studies in Islamic Civilization series

The eighteenth century brought a period of tumultuous change to the Ottoman Empire.

While the Empire sought modernization through military and administrative reform, it also lost much of its influence on the European stage through war and revolt.

In this book, Ethan L. Menchinger sheds light on intellectual life, politics, and reform in the Empire through the study of one of its leading intellectuals and statesmen, Ahmed Vasif.

Vasif's life reveals new aspects of Ottoman letters - heated debates over moral renewal, war and peace, justice, and free will - but it also forces the reappraisal of Ottoman political reform, showing a vital response that was deeply enmeshed in Islamic philosophy, ethics, and statecraft.

Tracing Vasif's role through the turn of the nineteenth century, this book opens the debate on modernity and intellectualism for those students and researchers studying the Ottoman Empire, intellectual history, the Enlightenment, and Napoleonic Europe.