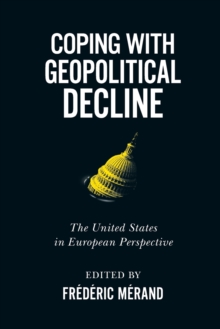 Coping with Geopolitical Decline : The United States in European Perspective

How great powers react to their inevitable decline shapes their own destiny as well as the course of international politics.

Leaders can decide to engage with others or isolate themselves; to build alliances or initiate war; to stoke up nationalism or invest in innovation; to focus on economic competition or develop their people's soft power.

While some of these coping strategies foster cooperation, others provoke conflict with neighbours.

In Coping with Geopolitical Decline leading political scientists, historians, and sociologists explore the strategies adopted by leaders and domestic elites to prevent, reverse, or deny the decline of their country.

Analyzing four European cases (Byzantium, England, France, Russia) before turning to the contemporary debate in the United States, they argue that geopolitics is not fate.

Coping strategies depend on the context, which includes cultural representations of decline, the experience of military defeat, and domestic politics.

Whether elites choose to modernize their economy, bolster their diplomatic status, or launch preventive war makes a difference in the extent and speed of a country's decline.

A well-managed decline allows for a peaceful power transition.

Some strategies, however, may preserve the peace at the expense of a country's standing, while others will stave off decline but encourage imperialist adventures or precipitate military conflicts.

As the United States challenges the liberal international order, fights back China's ascendency, and reconsiders its traditional alliances, Coping with Geopolitical Decline analyzes key lessons from Europe's experience and provides comparative insight into the likely dynamics of cooperation and conflict in the twenty-first century.