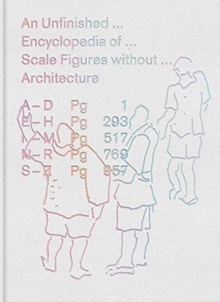 An Unfinished Encyclopedia of Scale Figures without Architecture

More than 1,000 representations of the human figure in architectural drawings by architects ranging from Aalto to Zumthor, removed from their architectural context. Michael Meredith, Hilary Sample, and MOS present their rich findings on the human presence in architectural drawings not in any chronological or other linear order, but based on the convention of the encyclopedia, thus presenting (and perhaps deliberately condoning) surprise encounters made possible by the contingency created by alphabetical order.....

From the contemporary perspective of a pluralistic world, the form of the encyclopedia may be particularly apt to represent such a vast body of material as is presented here: defying any linear historical account or master narrative, it invites the reader to construct his or her own readings of the material by establishing relationships between individual drawings. -From the foreword by Martino StierliThroughout history, across radically different movements in Western culture, the human figure appears and reappears, in multiple guises, to remind us, the observers, of architectural purpose and of our mutual position in the world....This encyclopedia has enlarged or reduced all figures to the same approximate scale.

Meredith, Sample, and MOS have gathered them here in an unprecedented, intoxicating way, like being at a fabulous party. -From the afterword by Raymund RyanArchitects draw buildings, and the buildings they draw are usually populated by representations of the human figure-drawn, copied, collaged, or inserted-most often to suggest scale.

It is impossible to represent architecture without representing the human form.

This book collects more than 1,000 scale figures by 250 architects but presents them in a completely unexpected way: it removes them from their architectural context, displaying them on the page, buildingless, giving them lives of their own.

They are presented not thematically or chronologically but encyclopedically, alphabetically by architect (Aalto to Zumthor).

In serendipitous juxtapositions, the autonomous human figures appear and reappear, displaying endless variations of architecturally rendered human forms. Some architects' figures are casually srcawled; others are drawn carefully by hand or manipulated by Photoshop; some are collaged and pasted, others rendered in charcoal or watercolors.

Without their architectural surroundings, the scale figures present themselves as architecture's refugees.

They are the necessary but often overlooked reference points that give character to spaces imagined for but not yet occupied by humans.

Here, they constitute a unique sourcebook and an architectural citizenry of their own.