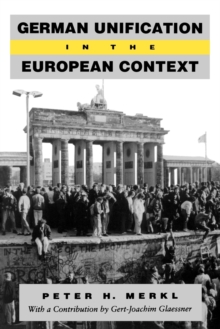 German Unification in the European Context

The collapse of the Communist regime in East Germany and the subsequent unification of East and West Germany were events of extraordinary historical importance, the ramifications of which will take years to unfold.

A leading U.S. expert on West German politics, Peter Merkl, had the good fortune to be a visiting professor at the University of Goettingen in 1990 and was able to witness this incredible transition firsthand.

While teaching at the Free University in Berlin in 1991, Merkl enlisted the cooperation of a leading East German expert, Gert-Joachim Glaessner, to contribute a chapter on the GDR.

The result is a work that offers a careful and comprehensive account of the process of unification and its implications for the future of European and international politics.

Merkl begins by laying out the historical German Question and placing the divided state in the international context of the Cold War and its consequences.

He then analyzes the generational differences between Germans over fifty who rallied to the challenge with enthusiasm and the less nationalistic younger generation who feared that the pursuit of unification would preempt such goals as a better life for West Germans and a livable environment.

Gert-Joachim Glaessner describes in detail the spectacular unraveling of the East German communist regime that ultimately led to the fall of the Berlin Wall amidst the disintegration of the other Communist regimes, arguing that they did not fall on their own nor as a result of West German or Western initiatives alone.

Merkl analyzes the process of political unification, the several elections of the year 1990, and the agreements made between East and West Germany.

He also discusses the international objections to German unification and the many obstacles that were and will need to be overcome to make German unity a reality.

He examines the attitudes of East and West Germans towards each other and their sense of national identity, the transformation of institutions and constitutions, and the immense problems and expense of rebuilding the East German infrastructure and economy and of privatizing state-owned operations.

Finally, he maps out the international significance of the great changes of the post-Wall and post-Communist world that will define the future role of united Germany vis-a-vis Germany's neighbors, the European community, the United States, and the world.

The book ends with a glimpse of how Germans envision themselves in the year 2000.