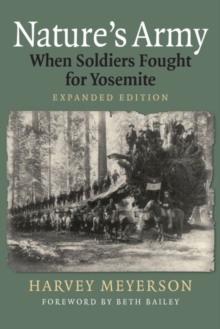 By: Meyerson, Harvey,  Bailey, Beth(Foreword by)

Blessings on Uncle Sam's soldiers! They have done their job well, and every pine tree is waving its arms for joy." John MuirMuir's words and this book both celebrate a crucial but largely forgotten episode in our nation's history - how a generation prior to the creation of a National Park Service, the US Army ran Yosemite National Park in an unusual alliance with the fabled preservationist John Muir and his Sierra Club.

Harvey Meyerson brings that largely forgotten episode in our nation's history to life and uses it as a touchstone for a reconsideration of a century of civilian-military cooperation in environmental protection and infrastructure construction whose impact and relevance still resonate. Despite the worldwide renown and popularity of Yosemite National Park, few people know that its first stewards were drawn from the so-called Old Army.

From 1890 until the establishment of the National Park Service in 1916, these soldiers proved to be extremely competent and farsighted wilderness managers.

Meyerson recaptures the forgotten history of these early environmentalists and how they set significant standards for the future oversight of our national parks. The army, Meyerson suggests, had actually been well prepared to assume this stewardship.

During its first hundred years - and despite the interruptions of warfare - its soldiers had crisscrossed the American landscape, preparing maps and writing detailed reports describing climate, weather, physical terrain, ecosystems, and the diverse flora and fauna populating the lands they explored and often protected during an era of wide-open exploitation of natural resources.