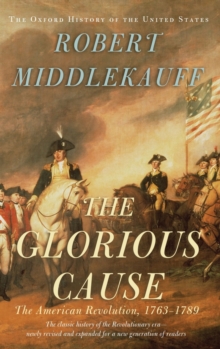 Part of the Oxford History of the United States series

The first book to appear in the illustrious Oxford History of the United States, this critically acclaimed volume - a finalist for the Pulitzer Prize - offers an unsurpassed history of the Revolutionary War and the birth of the American republic.

Beginning with the French and Indian War and continuing to the election of George Washington as first president, Robert Middlekauff offers a panoramic history of the conflict between England and America, highlighting the drama and anguish of the colonial struggle for independence.

Combining the political and the personal, he provides a compelling account of the key events that precipitated the war, from the Stamp Act to the Tea Act, tracing the gradual gathering of American resistance that culminated in the Boston Tea Party and "the shot heard 'round the world." The heart of the book features a vivid description of the eight-year-long war, with gripping accounts of battles and campaigns, ranging from Bunker Hill and Washington's crossing of the Delaware to the brilliant victory at Hannah's Cowpens and the final triumph at Yorktown, paying particular attention to what made men fight in these bloody encounters. The book concludes with an insightful look at the making of the Constitution in the Philadelphia Convention of 1787 and the struggle over ratification.

Through it all, Middlekauff gives the reader a vivid sense of how the colonists saw these events and the importance they gave to them.

Common soldiers and great generals, Sons of Liberty and African slaves, town committee-men and representatives in congress - all receive their due. And there are particularly insightful portraits of such figures as Sam and John Adams, James Otis, Thomas Jefferson, George Washington, and many others.

This new edition has been revised and expanded, with fresh coverage of topics such as mob reactions to British measures before the War, military medicine, women's role in the Revolution, American Indians, the different kinds of war fought by the Americans and the British, and the ratification of the Constitution.

The book also has a new epilogue and an updated bibliography.

The cause for which the colonists fought, liberty and independence, was glorious indeed.

Here is an equally glorious narrative of an event the changed the world, capturing the profound and passionate struggle to found a free nation.