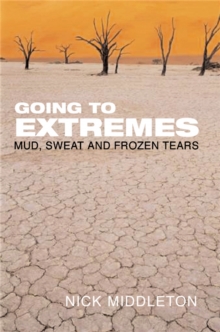 In Going to Extremes writer, presenter and Oxford geography don Nick Middleton visits Oymyakon in Siberia, where the average winter temperature is -47 degrees and 40% of the population have lost their fingers to frostbite while changing the car wheel.

Next he travels to Arica Chile where there have been fourteen consecutive years without a drop of rain and so fog is people's only source of water.

Going from the driest to the wettest, he visits Mawsynram in India which annually competes for the title with its neighbour Cherrapunji.

However, Nick discovers even here, that during the dry season, there is water shortage and one entrepreneur has started selling it bottled. Finally his journey takes him to Dalol in Ethiopia known as the 'hell hole of creation' where the temperature remains at 94 degrees year round.

Here Nick will join miners who work all day with no shade, limited water and no protective clothing. The book and series consider how and why people lives in these harsh environments.

How does Nick's body react to these contrasting extremes?

He looks at the geographical and meteorological conditions.

He meets local characters and discovers the history of these settlements to find out how they ever became populated.

He looks at the way both the population, and the flora and fauna, have adapted physically to the climate, and also considers the psychological impact of living under such conditions.