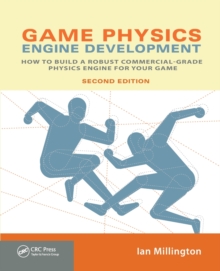 Physics is really important to game programmers who need to know how to add physical realism to their games.

They need to take into account the laws of physics when creating a simulation or game engine, particularly in 3D computer graphics, for the purpose of making the effects appear more real to the observer or player.The game engine needs to recognize the physical properties of objects that artists create, and combine them with realistic motion.

The physics ENGINE is a computer program that you work into your game that simulates Newtonian physics and predict effects under different conditions.

This is the only book in its category to take readers through the process of building a complete game-ready physics engine from scratch.

The Cyclone game engine featured in the book was written specifically for this book and has been utilized in iPhone application development and Adobe Flash projects. There is a good deal of master-class level information available, but almost nothing in any format that teaches the basics in a practical way.

The companion website will include the full source code of the Cyclone physics engine, along with example applications that show the physics system in operation.