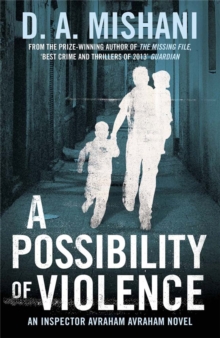 A possibility of violence

A suspicious device is found inside a suitcase near a nursery in Holon, Tel Aviv.

The children are taken to safety; a man is caught fleeing the scene.

Then comes the phone call:'the suitcase is only the beginning.' And it is.

Chaim Sara's son is glad not to be at nursery that day.

He has been bullied - there are bruises. Chaim, taking care of both his children since the sudden absence of his wife, watches with anticipation as the police search for clues.

Inspector Avraham is thrust into the investigation, still haunted by the failure of his last case.

Witnesses are unforthcoming; suspects are eliminated.

Then a frightening act of violence shifts his understanding.

The suitcase has alerted him to a greater danger; one more private, and deeply disturbing.

No one believes in it but him. And he will do anything to stop it in its tracks.