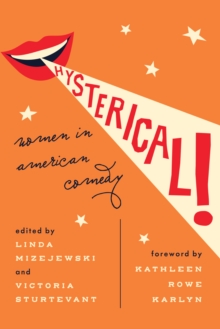 This anthology of original essays includes contributions by the field's leading authorities, introducing a new framework for women's comedy that analyzes the implications of hysterical laughter and hysterically funny performances.

Situated within the main currents of gender and queer studies, as well as American studies and feminist media scholarship, Hysterical! masterfully demonstrates that hysteria-women acting out and acting up-is a provocative, empowering model for women's comedy.