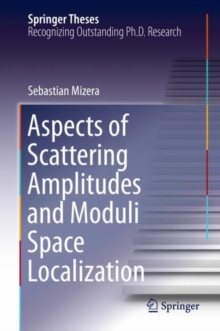 Part of the SPRINGER THESES series

This thesis proposes a new perspective on scattering amplitudes in quantum field theories.

Their standard formulation in terms of sums over Feynman diagrams is replaced by a computation of geometric invariants, called intersection numbers, on moduli spaces of Riemann surfaces.

It therefore gives a physical interpretation of intersection numbers, which have been extensively studied in the mathematics literature in the context of generalized hypergeometric functions.

This book explores physical consequences of this formulation, such as recursion relations, connections to geometry and string theory, as well as a phenomenon called moduli space localization. After reviewing necessary mathematical background, including topology of moduli spaces of Riemann spheres with punctures and its fundamental group, the definition and properties of intersection numbers are presented.

A comprehensive list of applications and relations to other objects is given, including those to scattering amplitudes in open- and closed-string theories.

These are formulated in terms of so-called braid matrices that encode the information of how points braid around each other on the corresponding Riemann surface.

Numerous application of this approach are presented for computation of scattering amplitudes in various gauge and gravity theories.

This book comes with an extensive appendix that gives a pedagogical introduction to the topic of homologies with coefficients in a local system.