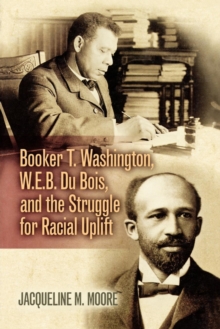 Part of the The African American Experience Series series

The beginning of the twentieth century was a critical time in African-American history.

Segregation and discrimination were on the rise. Two seminal African American figures began to debate on ways to combat racial problems.

Booker T. Washington and W.E.B. Du Bois developed different strategies for racial uplift as they actively competed for the support of the black community.

In the process, Washington and Du Bois made a permanent mark on the debate over how blacks should achieve equality in America. Although other books address the Washington-Du Bois conflict, this text provides a detailed overview of the issues in a brief yet thorough narrative, giving students a clear understanding of these two influential leaders.

Jacqueline Moore incorporates the latest scholarship as she examines the motivations of Washington and Du Bois and the political issues surrounding their positions.

Accompanying documents allow students to see actual evidence on the issues. Moore contextualizes the debate in the broader terms of radical versus accommodationist strategies of racial uplift. Washington-an accommodationist-believed economic independence was most important to racial equality.

W.E.B. Du Bois adopted more radical strategies, arguing that social and political equality-not just economic opportunity-were essential to racial uplift. This book traces the argument between these two men, which became public in 1903 when Du Bois published The Souls of Black Folk, which included an attack on Washington, his association with Tuskegee Institute's industrial education program, and accommodationism.

The clash between Du Bois and Washington escalated over the next 12 years. Du Bois was a founding member of the National Association for the Advancement of Colored People (NAACP), an organization that often opposed Washington's gradualist approach.

Although the NAACP became the major civil rights organization after Washington's death in 1915, the same issues Washington and DuBois debated surfaced in the 1960s Civil Rights Movement, and the debate raged once again between accommodationists and radicals.

In time, both men's ideals faded until the same issues surfaced again in the 1960s, and the debate raged once again between accommodationists and radicals within the Civil Rights Movement. Booker T. Washington, W.E.B. Du Bois, and the Struggle for Racial Uplift is an excellent resource for courses in African American history, race relations, and minority and ethnic politics.