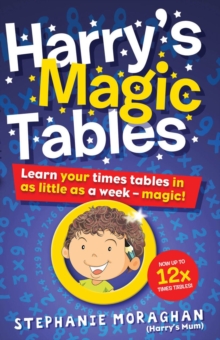 But when it came to learning his multiplication tables, difficult soon became impossible.

So Harry's mum invented an ingenious method of helping him over that first hurdle.

She combined pictures and rhymes to help him visualise the answers.

Just two weeks later, Harry had all his multiplication tables down pat. Soon, news of Harry's Magic Tables was spreading like wildfire through Harry's school.

In no time at all it had been shared and was helping classmates, friends, cousins, and even a few complete strangers. To date, the method has helped thousands of children make the leap to multiplication.

This newly expanded edition now includes, for the first time, 10, 11 and 12 times tables.