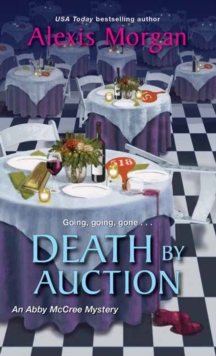 It's hard to say no to Tripp Blackston. That's how Abby found herself on yet another committee, organizing a bachelors' auction to raise money for Tripp's veterans group. The former Special Forces soldier is mortified when Abby enlists him to be one of the prizes, but she has a covert plan to bid on him herself. Before she can, she's foiled by a sniper bid from a gorgeous stranger, who turns out to be Tripp's ex-wife, Valerie.

Still reeling from the shock that Tripp was married and wondering what his ex is suddenly doing in town, Abby goes looking to pay the auction's emcee, radio personality Bryce Cadigan. She finds him in the parking lot, dead in his car. Valerie appears to be the last one to have seen Bryce alive, so she's the cops' best bid for suspect. When she asks Tripp for helpand lodgingsit's Abby's turn to block by inviting Val to stay with her. But did she just open her home to a murderer?