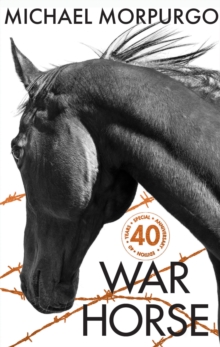 DISCOVER AND CHERISH THIS BEAUTIFUL HARDBACK 40th ANNIVERSARY ILLUSTRATED EDITION OF THE BELOVED MODERN CLASSIC, WAR HORSE. Before the Steven Spielberg film, before the National Theatre production, there was the classic children's novel... In the deadly chaos of the First World War, one horse witnesses the reality of battle from both sides of the trenches.

Bombarded by artillery, with bullets knocking riders from his back, Joey tells a powerful story of the truest friendships surviving in terrible times. One horse has the seen the best and the worst of humanity.

The power of war and the beauty of peace. This is his story. With a stunning new cover from fine arts photographer, Nine Francois and chapter illustrations from award-winning war artist, George Butler. War Horse was adapted by Steven Spielberg as a major motion picture with Jeremy Irvine, Emily Watson, and Benedict Cumberbatch.

The National Theatre production opened in 2007 and has enjoyed successful runs in the West End and on Broadway.