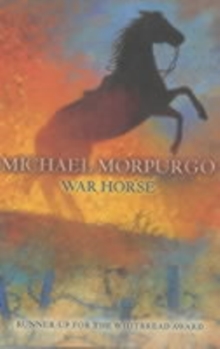 Sold to a drunken farmer, Joey, a beautiful red-bay foal with a distinctive cross on his nose, finds a friend in the farmer's son, Albert.

His father brutally demands Joey work or be sold, so Albert gently trains him to pull the plough.

But it's not enough. When war breaks out, Albert's father, needy for money for his struggling farm, sells Joey to the army, where he, like the soldiers around him, must try to cope with the horrors of the First World War.

Joey and another thoroughbred horse, Topthorn, lead in a terrible cavalry charge towards the machine guns of the enemy's lines.

Joey is captured by the Germans and for while he is lovingly cared for by Emilie, a young French girl and her grandfather.

But he and Topthorn must pull a heavy gun, battling through the mud until Topthorn dies of exhaustion.

Joey wanders in no man's land, back towards the British trench, but despite a joyful reunion with Albert, Joey is not out of danger.

First tetanus threatens his life, and even then Emilie's grandfather has to bid to save him from the butcher. The old man promised his granddaughter when she died he would find the horse she loved and buy him, but recognising Albert's love for Joey, he sells Joey back to Albert on condition he will love for him all his life - for the princely sum of one English penny.