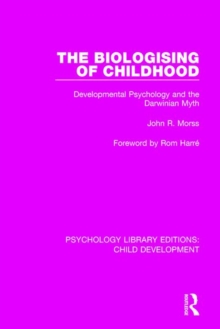 The biologising of childhood : developmental psychology and the Darwinian myth

Originally published in 1990, this book looks at the history of developmental psychology in order to locate and evaluate the role played by biology in its most influential formulations. First Charles Darwin's own writings on child development are examined.

It is shown that Darwin endorsed such ideas as the 'recapitulation' of evolutionary ancestry in the developing child, even though this is inconsistent with his natural selection theory.

The next generation - Vygotsky, Piaget, Werner - applied similar ideas in a variety of ways. Alongside this evolutionism, but interconnected with it, sensationist/empiricist forms of epistemology were directing developmentalists (from Rousseau onwards) to see the child as having to work himself out of sense-bound experience - to develop further and further from the 'here-and-now'.

Major conclusions are stated in chapter ten, which includes a re-evaluation of Darwin's role.