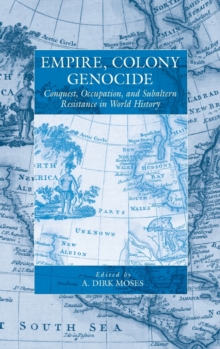 Part of the War and Genocide series

In 1944, Raphael Lemkin coined the term "genocide" to describe a foreign occupation that destroyed or permanently crippled a subject population.

In this tradition, Empire, Colony, Genocide embeds genocide in the epochal geopolitical transformations of the past 500 years: the European colonization of the globe, the rise and fall of the continental land empires, violent decolonization, and the formation of nation states.

It thereby challenges the customary focus on twentieth-century mass crimes and shows that genocide and "ethnic cleansing" have been intrinsic to imperial expansion.

The complexity of the colonial encounter is reflected in the contrast between the insurgent identities and genocidal strategies that subaltern peoples sometimes developed to expel the occupiers, and those local elites and creole groups that the occupiers sought to co-opt.

Presenting case studies on the Americas, Australia, Africa, Asia, the Ottoman Empire, Imperial Russia, and the Nazi "Third Reich," leading authorities examine the colonial dimension of the genocide concept as well as the imperial systems and discourses that enabled conquest.

Empire, Colony, Genocide is a world history of genocide that highlights what Lemkin called "the role of the human group and its tribulations."