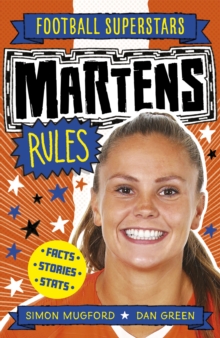 Part of the Football Superstars series

Filled with quizzes, stats and little-known facts, plus illustrated and told with all the fun of a Tom Gates novel, the Football Superstars series is perfect for young readers five and up.

Is Lieke Martens your ultimate football heroine? She is a winner of multiple trophies at club level with Barcelona, including the Primera Division (2019-20) and the Supercopa Femenina (2020).

She also starred for the Netherlands when they won the Women's European Championship in 2017. Among the world's most accomplished female footballers, Martens began her career in her native Holland with Hereenveen before moving on to VVV-Venlo.Her skills and talent have seen her go on to play in Germany with Duisburg and in Sweden with Goteborg and then Rosengard where she won the cup and Super Cup in 2016.