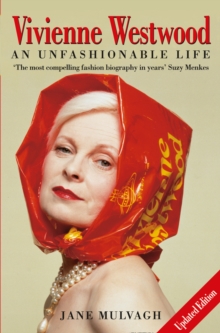 The biography of one of England's great eccentrics and leading fashion designers, reissued in an updated edition to coincide with a major exhibition of Westwood's work at the Victoria & Albert Museum.For more than two decades, Vivienne Westwood has been one of Britain's most consistently original, outrageous, eccentric and controversial designers.

In that time she has evolved from an iconoclastic outsider to an internationally revered figure, with two British Designer of the Year awards, an OBE, her own successful fashion label and an unrivalled reputation for leading where other designers follow.

Her lifestyle could scarcely be in greater contrast to the opulence which surrounds other leading designers: until recently she lived in a modest council flat in South London, and she travels around the capital by bicycle, dressed in her own flamboyant creations, with a plastic bag protecting her hair from the elements.

How did an awkward girl from a conventional and provincial background become one of world fashion's most influential and respected designers?How has she managed to remain true to her own idiosyncratic vision, refusing to conform to the fashion industry's, and society's, expectations?

Speaking to Westwood herself, her friends, lovers, colleagues, rivals, admirers and detractors, Jane Mulvagh has created a rich and surprising portrait.