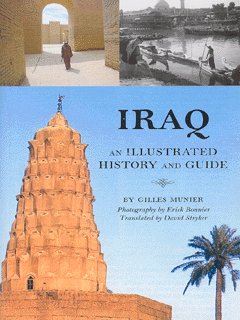 Iraq : an illustrated history and guide

By: Munier, Gilles,  Bonnier, Erik(Photographs by)

Iraq's contemporary image provides few clues to the magnificence and power of her past.

As Mesopotamia ("land between the two rivers"), Iraq, which lies between the Tigris and Euphrates rivers, was probably the earliest centre of human civilisation.

But Mesopotamia has always been in upheaval, down to the present day.

Over the past hundred years the ancient land of Mesopotamia has progressively become closed to western access.

Now, the Gulf War, the decade-long embargo, and the drumbeats of another war have all but locked the door to foreigners.

Yet Gilles Munier has been able to travel extensively in this war-torn country, and he brings a refreshingly compassionate vision of the land that was once the cradle of humanity.

He has visited the tomb of Islam's first martyr at Karbala, lost himself in the tiny streets of old Baghdad, and trekked to Kurdistan and the "Country of the Reeds".

The result is a sumptuously illustrated and impeccably documented history of the country which boasts the ruins of ancient Nineveh, Chaldea (Abraham's birthplace), Babylon, and Samara. Embark upon a voyage of discovery to the place where writing was first invented, to the city that was the center of the Arab Golden Age, to the place where much that we still are once began.