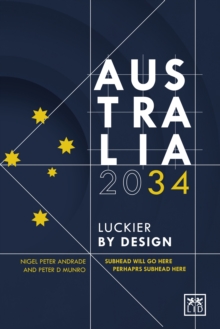 Australia has written one of the most remarkable economic growth stories of the century and is now poised to shape its future not out of crisis but out of opportunity.

The past two decades have brought unprecedented change and major shifts in demographics, the economy, and businesses.

The population has grown rapidly, adding five million people to the increasingly diverse ranks of those who call the country home.

GDP and per-capita income have skyrocketed, and businesses are thriving as more profitable ventures than ever before.

This book sheds light on the road the nation has travelled and the efforts of the inspired business leaders who shaped that journey.

Drawing on examples from forward-thinking players, Australia 2034 charts the way for businesses to navigate the next 20 years.

While the focus of this book is Australia and Australian business, the capabilities discussed are highly relevant for players in other markets - especially those that have been less fortunate, but are looking for ways to create their own "luck" in a world that seems to offer few second winds.