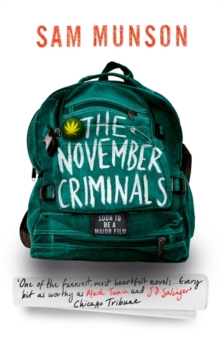 'What are your best and worst qualities?' This is the title of the essay Addison Schacht has to write to gain a place at his chosen university.

Straightaway, Addison sees an opportunity to tell his story-so-far: to unburden himself, so to speak. And boy is there a lot to unburden. His 'business' - dealing pot to his peers - is booming, and requires a certain extra effort.

His relationship with Digger, his best friend (NOT girlfriend), is getting 'complicated', as they say.

His classmate Kevin was murdered point blank, and now Addison can't stop thinking about who killed him, and why? And then there's the small question of the rest of his life ...Over the course of his unorthodox application, Addison confess his triumphs, tragedies, strengths, weaknesses, blessings and curses to his academic jury. The November Criminals is the darkest, most raucous and unconventional love story/murder mystery/ coming-of-age crossover you will read this year.