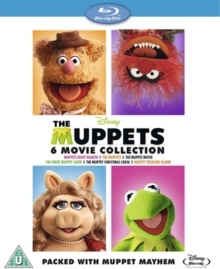 While on a European tour Kermit the Frog (voiced by Steve Whitmire) is mistaken for a Russian jewel thief called Constantine (voiced by Matt Vogel), to whom he bears a striking resemblance, and is thrown in jail by prison officer Nadya (Fey).

Seeing an opportunity for a new life Constantine poses as Kermit and joins the rest of the Muppets on their tour. 'The Muppets' (2011) stars Jason Segel as the human brother of Muppet Walter (voiced by Peter Linz) who Walter approaches for help in raising ten million dollars to save the vaudeville house where the Muppets used to perform.

Amy Adams also stars. In 'The Muppets Movie' (1979) Kermit (voiced by Jim Henson) leaves behind his swamp and heads for the big lights of Hollywood to fulfil his dream of becoming a star.

In 'The Great Muppet Caper' (1981) the Muppets travel to London to investigate the disappearance of Lady Holiday's jewels, Miss Piggy (voiced by Frank Oz) is framed for the theft. 'The Muppet Christmas Carol' (1992) is the Muppet's version of Charles Dickens' immortal festive tale about a bitter old man who is shown the error of his ways. 'Muppet Treasure Island' (1996) sees the Muppets go on an adventure on the high seas in their version of the famous pirate adventure.