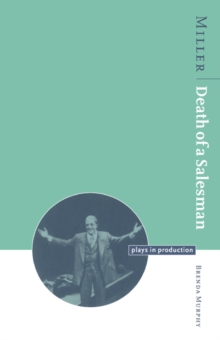 Miller: Death of a Salesman

By: Murphy, Brenda (University of Connecticut)

Part of the Plays in production series

This is the first book to provide a critical history of one of American theatre's most famous plays, Death of a Salesman.

Brenda Murphy offers a detailed account of the most significant Salesman productions throughout the world, on the stage as well as in film, radio, and television.

The Death of a Salesman that was first realised on stage was the culmination of the creative collaboration among playwright Arthur Miller, director Elia Kazan, and actor Lee J.

Cobb, and was the starting point for hundreds of productions in many languages and styles.

The play has also provided a number of memorable interpretations by actors such as Dustin Hoffman, George C.